Dior Spring Summer 2021 Haute Couture collection pays subtle homage to Monsieur Dior, who also believed in the signs of destiny. “Being superstitious, I rushed to touch the slightest piece of wood,” he confided in his autobiography. A mesmerizing passion, filled with a sense of magic and dreams.

Tarot cards are among the keys to accessing the magical realm, to explore the unknown while fearlessly looking deep inside oneself. Maria Grazia Chiuri immediately felt a connection with these imaginary worlds and this visual language whose symbolic lexicon is rich in complex and fascinating characters. In uncertain times marked by a palpable desire to reconnect with the world’s soul, Maria Grazia Chiuri wished to explore, through the spring-summer 2021 haute couture collection, the mysterious and pluralistic beauty of the tarot in a series of dresses featuring virtuoso constructions; manifest proof that couture remains the ultimate territory of experimentation and possibility.

A series of extraordinary evening gowns features abstract constructions, some with veritable bas-relief openwork bodices punctuated with illustrations by Pietro Ruffo. In this spirit, the Roman artist created a singular deck of cards in which characters disclose the graphic energy of the symbols.

Dior gray appears in tweed, cashmere and organza on shirts, skirts, pants and capes. Meanwhile, the Bar jacket is revisited in black velvet, its curves reinterpreted to express a new attitude.

In his staging of these haute couture creations, Matteo Garrone, one of Italy’s most high-profile directors, builds on the narrative iconography by drawing on the visual force of the Visconti-Sforza tarot. Decorated by the illuminator Bonifacio Bembo for the Duke of Milan in the 15th century, this tarot deck illustrates the marvelous tale of this collection. Splendid cards embellished in gold, enamel, and vegetal and geometric interlacing have a solemn and enigmatic presence, revealing an inner journey, like an adventure of self-discovery. A voyage to the heart of a castle populated by characters embodying the major arcana who question and disorient, inviting the viewer to look at the world from a new perspective. In the director’s interpretation, this quest surpasses gender boundaries, presenting a synthesis of masculine and feminine in a new heraldic mythology evoking the enchanted worlds Matteo Garrone loves.

A clairvoyant asks to draw a card in a deck designed as a catalogue of possibilities, a cryptic dictionary of the world. The High Priestess, the Empress, Justice and the Fool, are notably sublimated through excellence of savoir-faire celebrating the art of weaving: lace is inlaid with hand-painted embellishments, golden velvet is enlivened with the signs of the zodiac and precious jacquards are sprinkled with stars, while a cape in multicolored feathers showcases 3D volumes.

In this story, the insider always needs the feminine complement and vice versa, because only such a fusion makes it possible to approach a formative path leading to self-awareness. As Italo Calvino points out in The Castle of Crossed Destinies: “The world has to be read upside-down”.

Miuccia Prada kicked off Milan fashion week with Prada’s Spring Summer 2020 runway show, with a new take on elegance and understatement. For the show, AMO devised a vibrant geometric pattern of ceramic tile and interlocking seating that enfolds across the hall of the Fondazione Prada Deposito – illuminated and infused with a golden glow.

See every look from the collection in the gallery below.

Burberry Spring/Summer 2020 collection was unveiled in London on September 16. Titled ‘Evolution,’ the collection is a confirmation of Riccardo Tisci’s exploration of Burberry House codes, spun through his modern lens. Set to a soundtrack curated by William Djoko. Make-up artist Pat McGrath created the beauty looks for Evolution. Check out the entire lineup below.

From mega minis to pointy collars, gothic maxis and floor-skimming coats, all the new season goodies to buy now.

As we mourn the last days of summer, the time has come to press pause on the purchasing of strappy dresses and slinky sarongs. Now is the time to get ahead and start investing in some key pieces that will work hard in your winter wardrobe. And this season, the runways were an eclectic mix.

To make sense of the seemingly-anything-goes mishmash of options on offer, we have selected the key trends that we’re convinced will be big this winter.

A prudish aesthetic permeated via sensible suiting, Regency dresses and floor-skimming coats, while sassier dressers were catered for via maximal mini dresses and frou-frou ruffles. 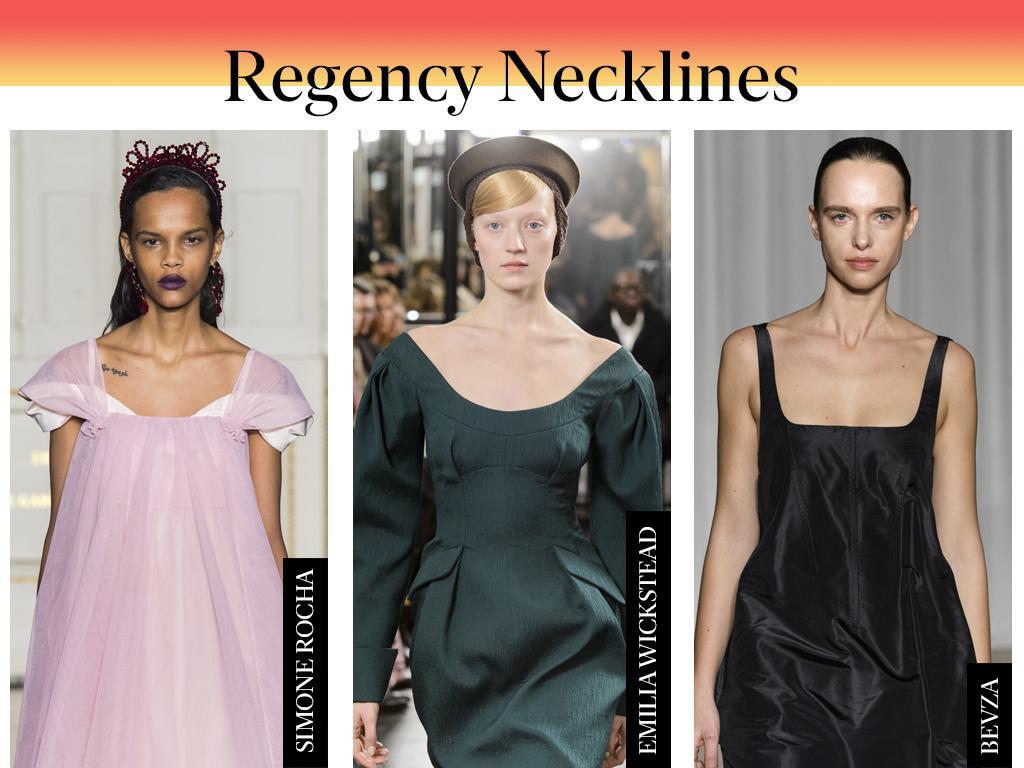 It is a truth universally acknowledged that… softly rounded, Regency-inspired square necklines are set to replace Victoriana pie crust collars for autumn. Darcy-delighting minimalist interpretations were seen at Bevza and Chalyan, while Paul Costelloe’s bosom-bearing floral jacquard would no doubt get Mrs Bennett’s seal of approval. 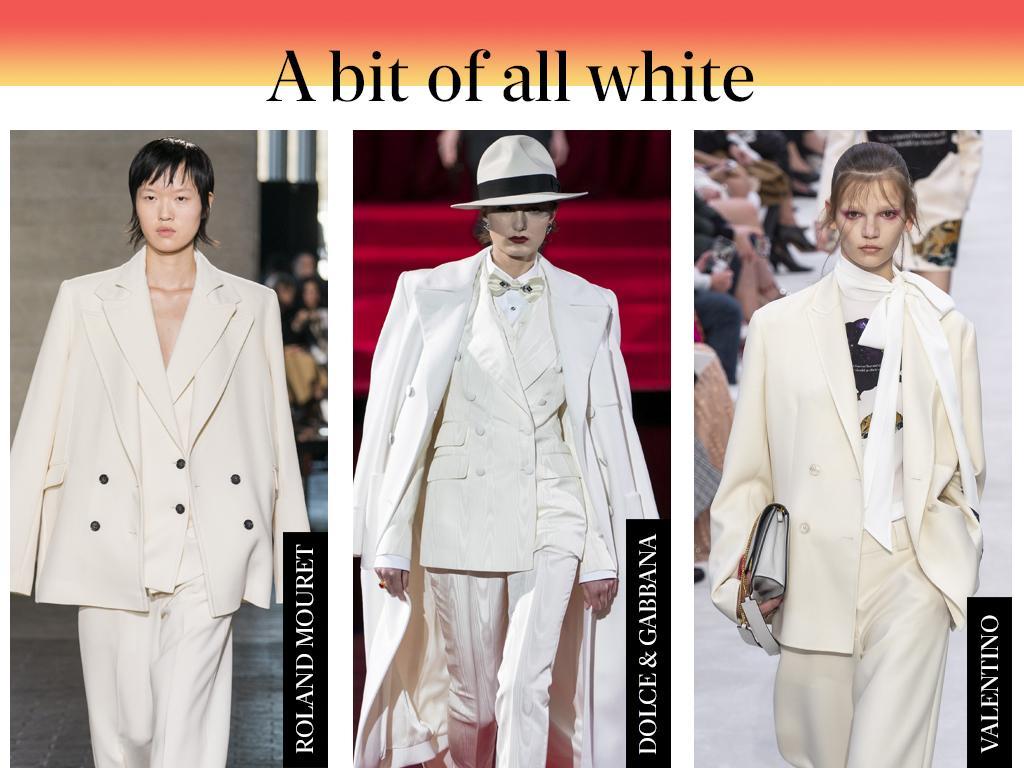 By now you’re familiar with a warm weather white-out, but who says the all over bleach is just for the beach? Full on frosty ensembles are a crisp and clever way to dress for cooler climes. Models at Roland Mouret and Dolce & Gabbana doubled down on ivory suiting, while Fendi and Chanel showed top-to-toe winter whites worthy of a super chic ski trip. Fresh, versatile and powerful in its purity, head-to-toe snow is a look for all seasons – though best avoided by the mucky eaters. 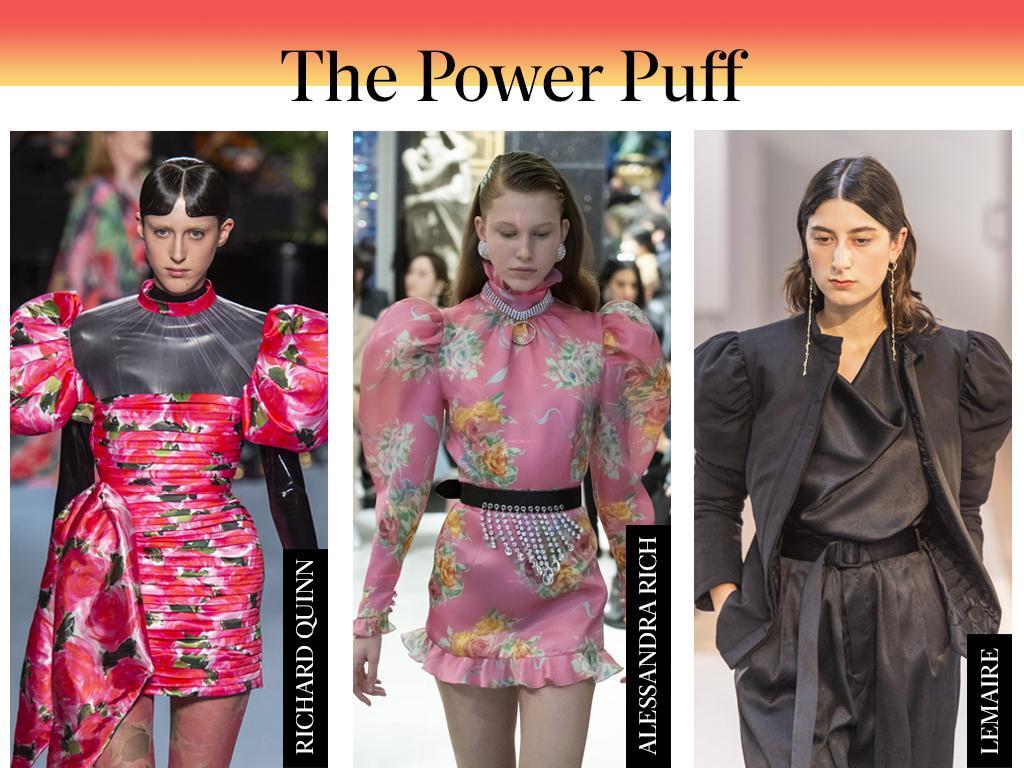 Billowing sleeves have been a mainstay of our 2019 summer wardrobes, and, for winter, the balloon sleeve has far from burst, in fact it’s been blown a little bigger, and very much migrated up to the shoulders. Anyone in the market for some OTT party dresses should look no further than Alessandra Rich and Richard Quinn, who made the case for floral minis with exaggerated puffball shoulders, while the statement tailoring at Givenchy, Lemaire and Alexander McQueen were office-appropriate ways to tackle the trend. 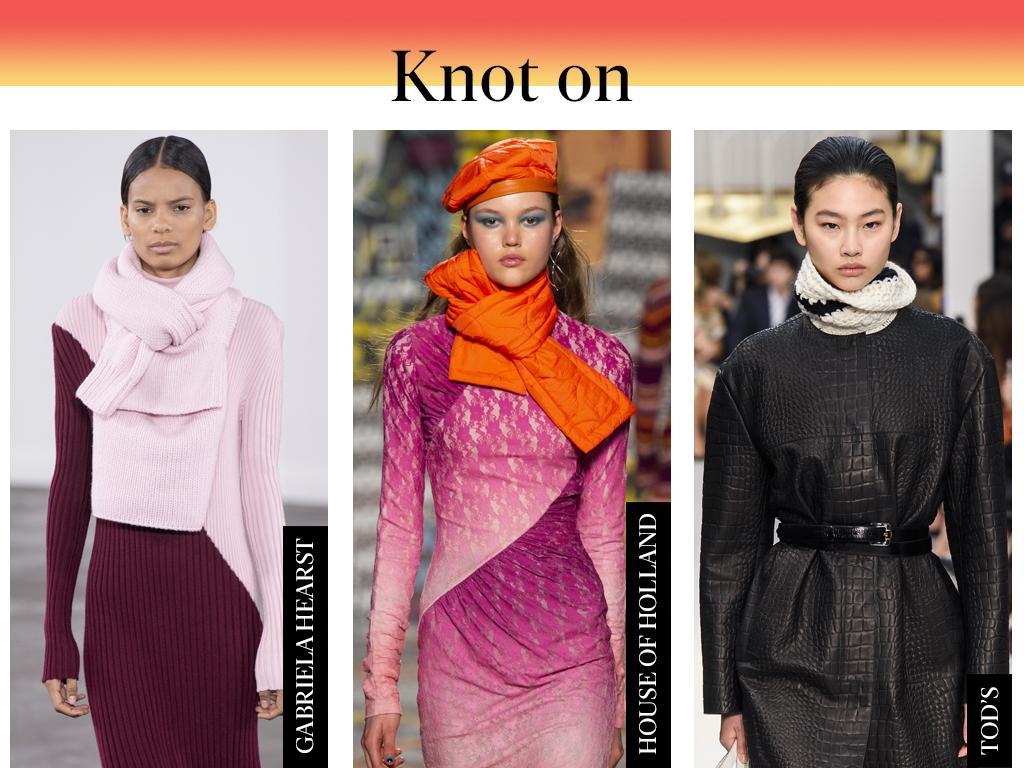 Bid adieu to summer’s silk headscarves, for winter’s neck gear is brief and beefy. Gabriella Hearst kept short scarves tonal, while Henry Holland knotted neon quilting at jaunty angles and Tod’s wrapped last year’s chunky knits tight about the neck. At Chloe the trend was further truncated with brightly coloured, thick-knit snoods. However you choose to tie ‘em, this season’s message is clear. No flapping tassels, no billowing blankets; do knot mess around. 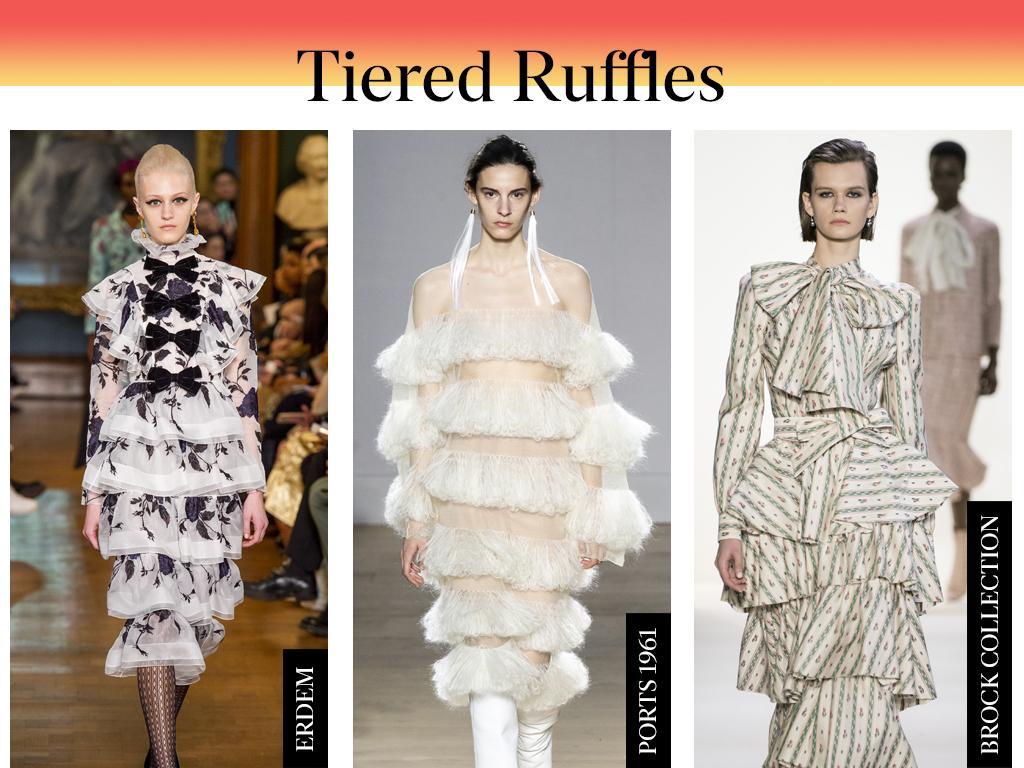 Ruffle hems and prairie collars have been big on the sartorial agenda for a year now. But come autumn, and one frill will simply not do. According to everyone from Erdem to Ports 1961, Roksanda and Molly Goddard, 2019’s Christmas parties will be awash with frou-frou layer cakes. While not for the faint of heart, the flounce, once mastered, can be truly frilling. Go forth friends, and ruffle some feathers. 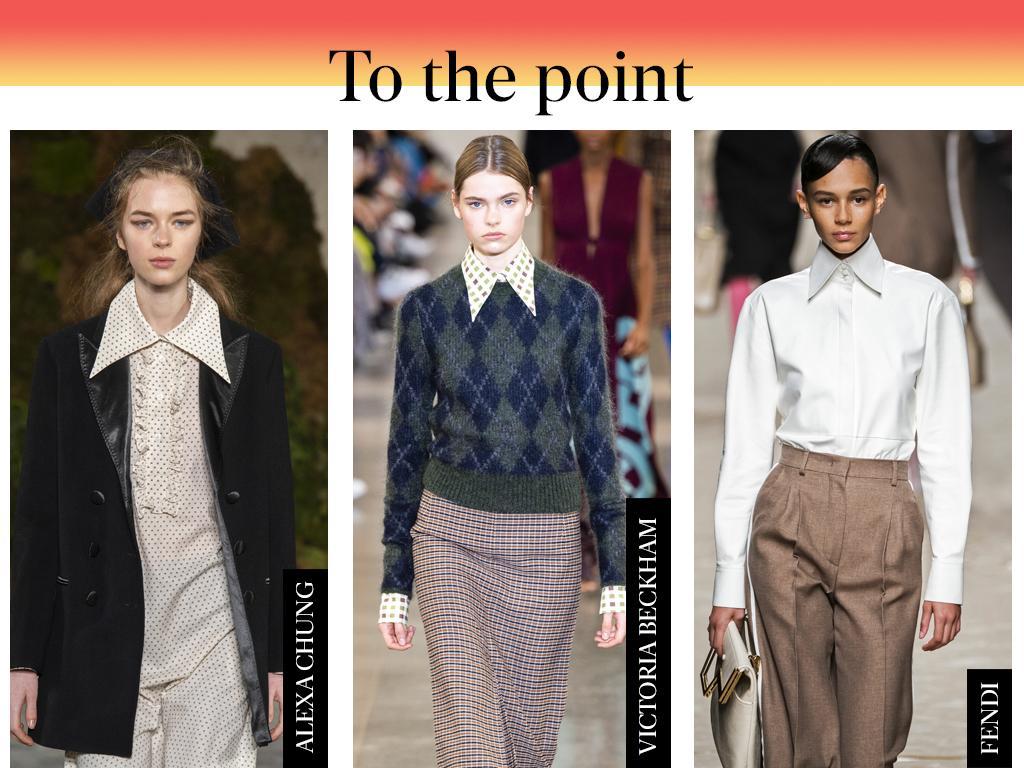 Spring’s rounded Peter Pan collars are set to be replaced this season by altogether sharper-necked shirting. Everyone from Alexa Chung to Eudon Choi, Fendi and Victoria Beckham decreed an exaggerated Elvis collar to be boss. Wear over the lapels of your jacket and poking over the top of jumpers for a look that’s kinda nerdy, but that’s the (pointy) point. 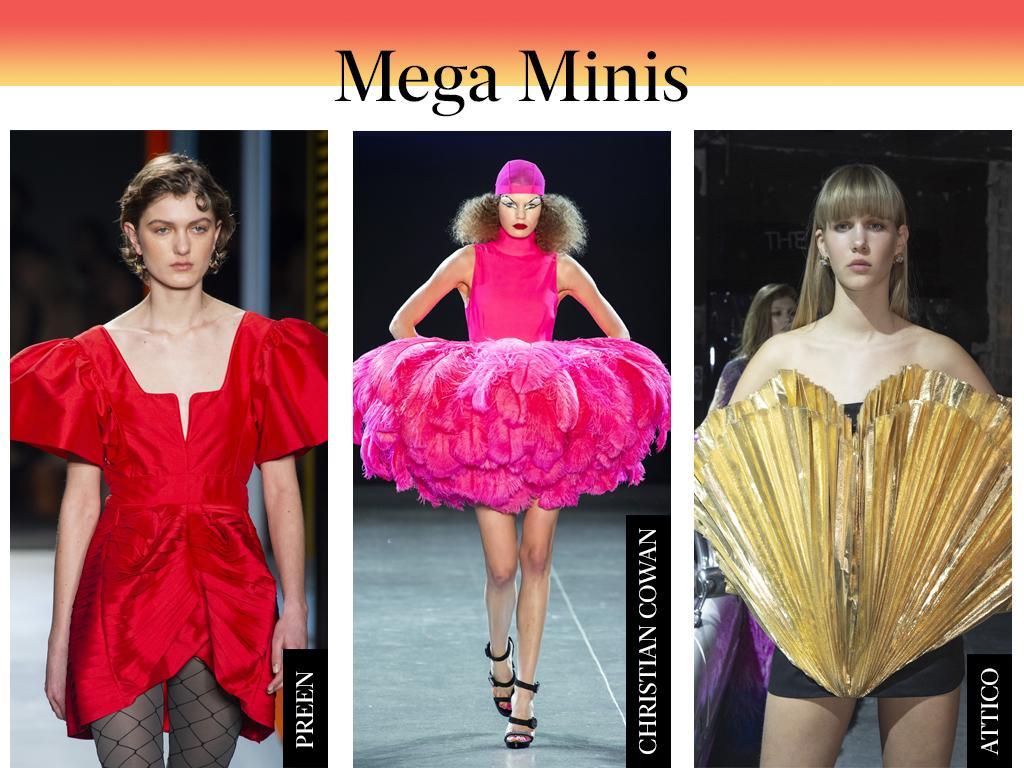 The midi dress has had a lot of airtime over the last few years, and frankly her naughty younger sister, the mini, is well overdue her time in the sun. From Christian Cowan’s fuchsia feathered swan-like creations to Attico’s golden foil hearts, this season the mini is back, and in true mini style, she’s mightier and minxier than ever. 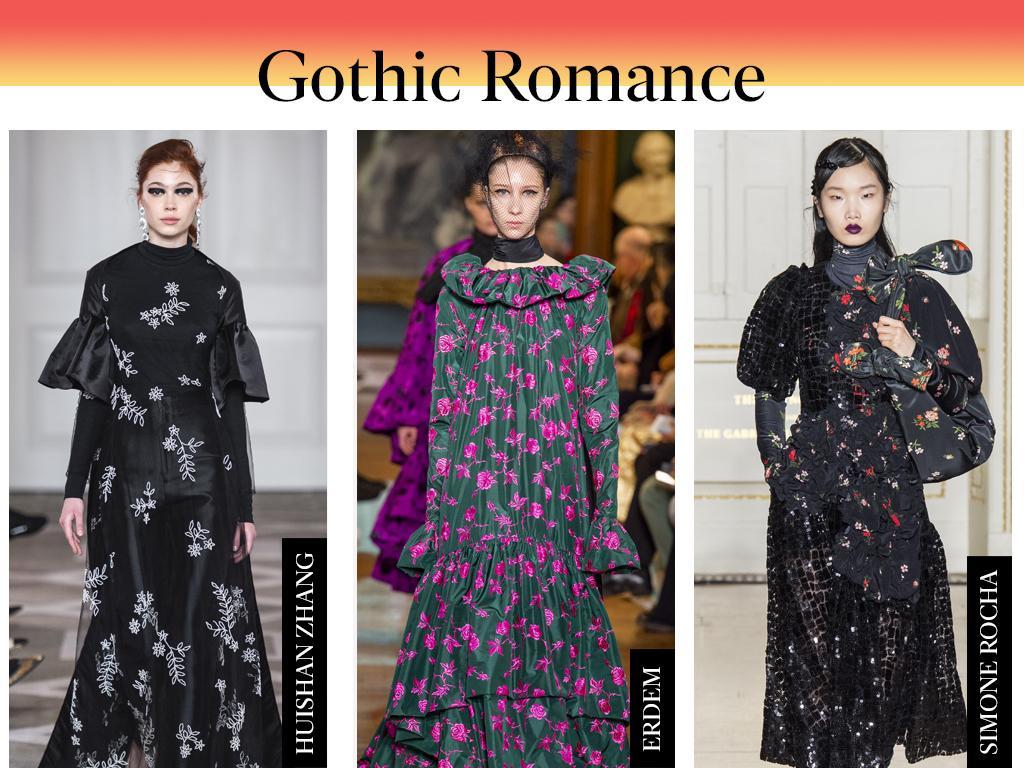 OK, we’ll admit, florals as a trend is not (ahem) ground-breaking, but a trend it is, once again. This winter take your cues from Erdem, Simone Rocha, Dries Van Noten and Lela Rose and opt for maxi dresses in hues of purple, black and claret and unapologetically bold floral designs. Think Dracula on date night. 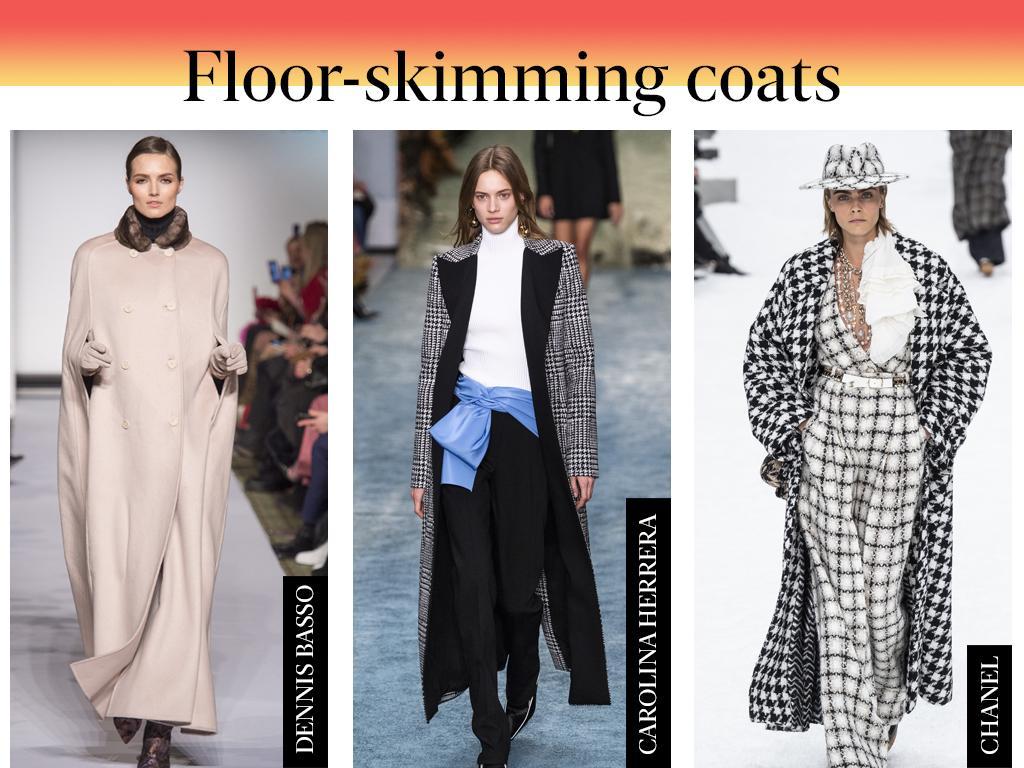 Perhaps it’s the extravagant excesses of material, or maybe it’s the devil-may-care attitude to the inherent risk of rising damp, but there is something so fabulously louche about a floor-skimming, ankle swooshing winter coat. Go oversized houndstooth a la Chanel, or demure dusty pink a la Dennis Basso, but whatever you do, go long. 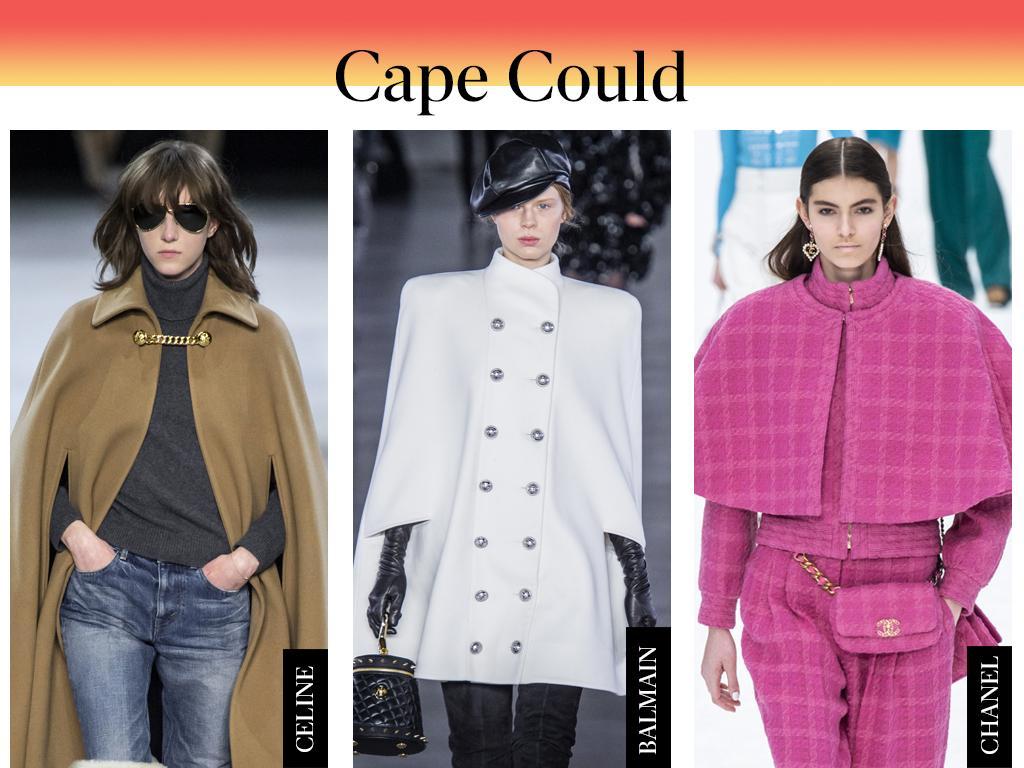 From opera-ready jacquard at Richard Quinn, to floor swooshing boucle at Chanel and dinky little boleros at Mishka and Dolce, capes were all over the autumn 2019 runways. A good cape has the power to make you feel simultaneously shielded and powerful, not to mention more than a little bit like a superhero. And frankly, in times like these, we could all do with a bit of that. 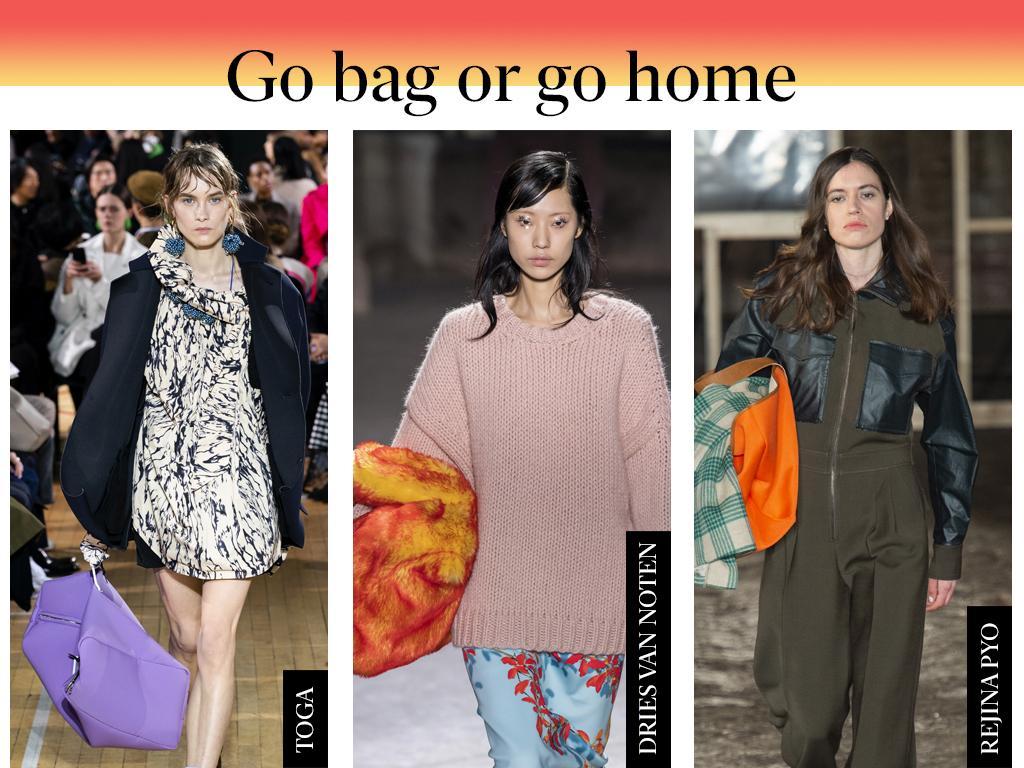 We got to the point where our teeny tiny bags couldn’t get any teenier. Hell, some of them didn’t even fit an iphone. Fashion’s answer? To embrace the other extreme and advocate larger-than-life totes. Proenza Schouler, Jacquemus, and Stella McCartney all gave us monster holdalls – quite the handful, but at least we have space for all seven of our favourite lip balms. 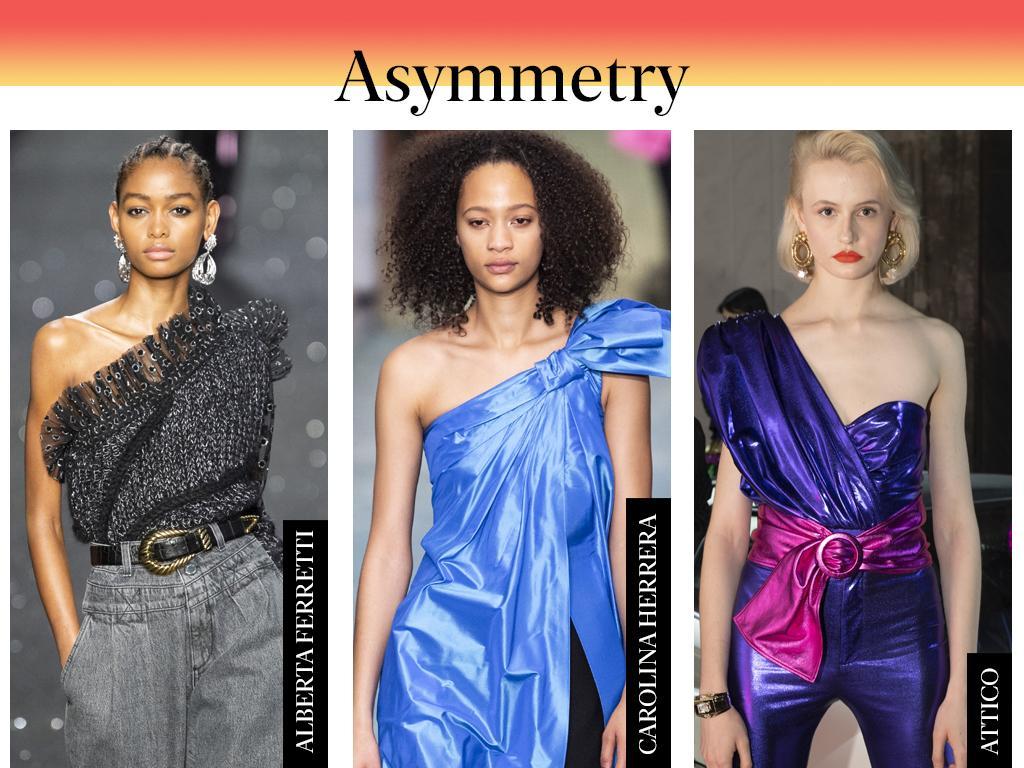 Do you have a favourite shoulder? No? Best make a decision pronto because only 50 per cent of your clavicle mass will be seeing the light of day come party season. Attico, Halpern and Saint Laurent all made the case for eighties-inflected one-shouldered party dresses, while Alberta Ferretti offered an asymmetrical top that wouldn’t look entirely out of place in a (rather glamorous) boardroom. Best blade forward . 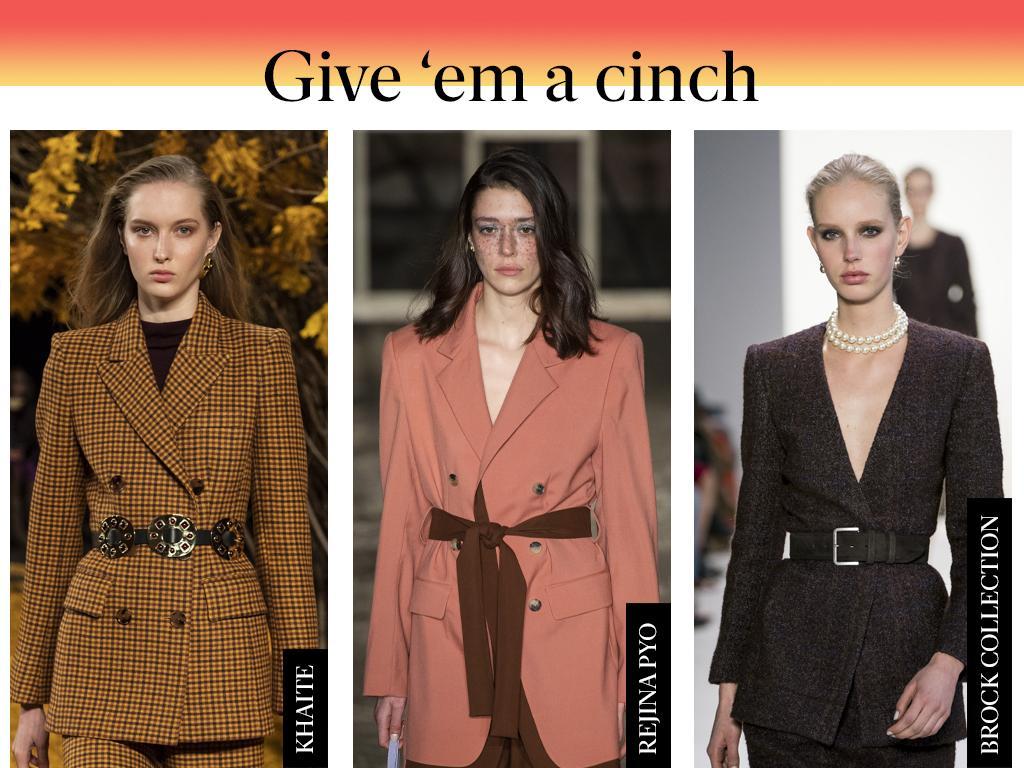 Suits have been a sartorial staple for some time now, and for winter 2019 they’re getting broader shouldered and wider legged. To balance these new proportions many houses showed jackets nipped in at the waist with belts. From the skinny belts on oversized jacket dresses at Acne, to leather disc belts over tawny checks at Khaite, this season’s suiting really is a cinch.

END_OF_DOCUMENT_TOKEN_TO_BE_REPLACED

Simon Porte Jacquemus celebrated the 10th anniversary of his label with an epic show, presenting a refined collection, spanning sensuality and elegance, staged in the middle of a lavender field in Southern France, titled “Le Coup de Soleil”.

Models showcased the label’s new collection on a bright pink carpet runway laid out among the rows of lavender. The collection came in white and sunny, uplifting colors, perfectly at home in this spectacular setting. There was also a multitude of floral motifs, harmoniously echoing the show’s location.

There was, however, a certain contrast between the elegance of the pieces designed for this anniversary show — such as floaty, lightweight dresses in long and mini styles, blazers, pleated skirts and suits — and the earthy rusticity of the landscape in which they were presented. That no doubt contributed to the charm of this sun-soaked show.

Oversize designs ruled in this new collection, putting a laid-back, even nonchalant slant on the most refined of silhouettes. There were also plenty of accessories on show, like large hats, belt bags, baskets, sandals and the iconic Chiquito mini bag — a Jacquemus signature.